What Bethel Brings to The Pats

The New England Patriots found themselves in a very fortunate situation with the mid-season acquisition of Justin Bethel.

He’s a three-time Pro Bowl special teamer that was let go by the Baltimore Ravens, but not by their choice. They released him to save a compensatory pick, and Ravens head coach John Harbaugh admitted that he didn’t want to let Bethel go. The Patriots signed him to a deal for less than $1 million this season and they are going to fully reap the benefits.

Bethel made two huge plays in Week 9 against his former team, one of which resulting in a fumble recovery on a muffed punt. 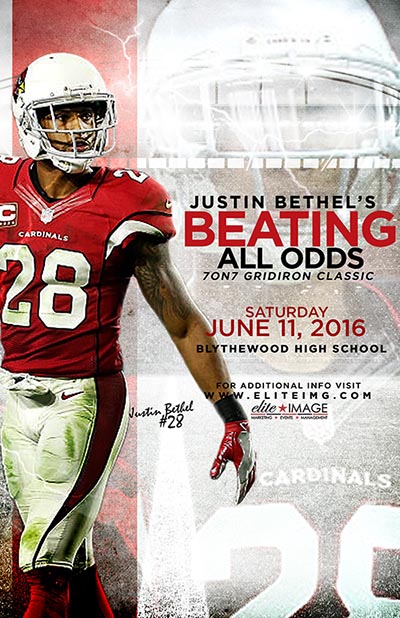 The double-­‐elimination tournament will feature 8 to 12 of the area’s high school football programs and the winning team will be awarded $5,000 from Bethel for its high school program. NFL players will be serving as honorary coaches for the high school teams that day. Those slated to be on hand include Mike Adams,  Rashad  Johnson,  Jerraud  Powers,  Jamell  Flemming,  Tony  Jefferson,  Frostee  Rucker,  Michael  Floyd, Jaron Brown, Marcus Lattimore, Andre Ellington and more.

The tournament will start at 11:00am, is free and open to the public. In addition to the tournament, autographed memorabilia will be raffled off with all proceeds benefitting the foundation throughout the event.

About the Justin Bethel Beating All Odds Foundation

The purpose of Justin Bethel’s Beating All Odds Foundation is to assist in the building and stabilizing of people and organization with finances to be a positive influence in the community or to provide a service that benefits the lives of others. This program furthers the organization’s exempt purpose by providing outreach and assistance to in-­‐need and underprivileged individuals. It is our mission to be a positive and effective influence in the community.

Justin Bethel was selected for his third straight Pro Bowl as a special teamer. Through 15 games in the 2015 season, he has recorded a team-high 13 special teams tackles and has forced two special teams fumbles, despite playing more defense than in the past.  A total of seven Cardinals were selected, a team high since 1977.  The Pro Bowl players were determined by the consensus votes of fans, players and coaches. The Pro Bowl will be played on Sunday, January 31, 2016 and televised live on ESPN at 7:00 PM ET from Aloha Stadium in Honolulu, Hawaii. Read the full story at AZCardinals.com. See full list of Pro Bowl roster players by club at NFL.com.

ST. LOUIS – Being a multimillionaire is still sinking in for Arizona Cardinals defensive back Justin Bethel.

When he first signed his three-year extension worth $15 million — with $9 million guaranteed and the potential to earn another $1.8 million in incentives — on Saturday, a day before Arizona’s 27-3 win over the St. Louis Rams, it didn’t seem real.

Then the reality of the extension and the idea that he’ll be in Arizona long-term started settling in, Bethel said after the win, in which he had three tackles and two passes defensed.

“They drafted me. I love the city, I love the weather – can’t beat it –and I love my teammates, especially in our secondary group,” Bethel said. “Being with these guys, it’s like being with your brothers.

“We enjoy being out there together. We enjoy practice. It puts a smile on your face to come out there and know, ‘I’m going to get to go out there and play with these guys and have fun with them, joke with them.’ And, you know, we’re close on the field and close off the field. That’s something I definitely want to be a part of.”

There were times earlier in the extension process when Bethel contemplated hitting the open market as an unrestricted free agent in March. He believed he was in a good position to see what other teams would offer, having been to the last two Pro Bowls and one of the top special-teamers in the league while developing as a cornerback.

“But anything can happen in the free-agency market,” Bethel said. “You hear things and you kind of think like, ‘Well, maybe?’

Bethel was glad his future was figured out sooner rather than later. He’s signed until 2018, by which time he’ll be 28. He felt he was in an “awkward position” with the Cardinals because he’s not a good enough corner yet to demand cornerback money. Bethel made his second career cornerback start Sunday. He didn’t know what kind of contract he’d be offered, not just by Arizona but by any other team.

He believed the Cardinals took a chance on him by paying him that much with the hope and expectation that he’d pan out into a high-caliber corner.

“It showed they believe in me, that I can go out there and play the corner position,” Bethel said.

While he’s still basking in the glow of his new deal, Bethel knows exactly what the first things he’ll be doing are as soon as the money is deposited into his account.

“First thing is pay my tithe and offering to the church and then probably get a house,” he said with a smile. “I’ve been staying in an apartment the whole time I’ve been out here. Nothing big, something small. I live by myself. I ain’t got no kids. Get something small.

“Get something for me.”

TEMPE, Ariz. – All the work that Justin Bethel has put in over the last few years paid off in one play – his first play – Sunday.

After two games of trying to get on the field in Arizona’s speed package – which includes seven defensive backs – Bethel was finally able to sub in early in the first quarter against the San Francisco 49ers. He lined up in the deep nickel, on the left side of the defense, to the right of San Francisco quarterback Colin Kaepernick, about eight yards off tight end Vernon Davis.

At the snap, Bethel backpedaled about seven yards, then broke. On his first defensive snap of the season, the former Presbyterian College safety intercepted Kaepernick and returned it for a touchdown.

It looked easy, considering how Bethel broke on the passes.

It looked natural, after Bethel’s experience playing safety in college.

But it was years in the making.

And even still, after one pick-six, Bethel’s transition to an NFL corner isn’t nearly complete. In some ways he’s still just a beginner, trying to find consistent playing time among other corners who have played the position since before they could drive. To understand why Bethel isn’t the Cardinals’ starting right cornerback, opposite Patrick Peterson, is to understand his background as defensive back.

Bethel grew up playing wide receiver, and when he got to Blythewood High School in South Carolina, he was 5-foot-2 and 125 pounds as a freshman. Coaches quickly moved him to cornerback. He didn’t hit a growth spurt until his junior year, when he inched closer to his current height of 6-feet. At Presbyterian, a small liberal arts college that plays in the Football Championship Subdivision, Bethel spent one season at corner and then, because of injuries, he was the biggest corner left on the roster who was healthy and was moved to safety.

But playing for a small school had its misgivings.

He wasn’t given the proper and necessary coaching on the fundamentals of being a cornerback or safety, he said. Mostly everything Bethel knew about playing defensive back, he said he learned in high school. The rest, he did how it felt natural.

“I didn’t really get coached because I was so athletic, they just kind of let me do whatever I felt would work for me,” Bethel said. “And when you get to the league, there’s a lot of players you’re going against, so you definitely have to fine-tune your technique.”

Bethel was drafted in 2012 by the Cardinals’ last regime, led by former coach Ken Whisenhunt and former general manager Rod Graves. Bethel has told teammates they wanted to keep him as a safety, the position he played his last three years of college, but he played just 10 defensive snaps his rookie season while blossoming into a future Pro Bowl selection as a gunner.

Not getting that immediate attention or experience has been one reason why Bethel believes his growth as a corner has been stunted.

“I think it probably set me back a little bit, especially not playing too much until last year,” Bethel said. “And that was more inside stuff.

“I think it definitely slowed my progress down.

In Bruce Arians’ first season as coach in 2013, Bethel never played on defense but earned his first Pro Bowl invitation on special teams. He was developing a niche as one of the top gunners in the league, and the Cardinals began grooming him as a cornerback.

Bethel’s largest on-field growth spurt came last season, when he played 93 defensive snaps, and this past offseason, which started by him studying some of the league’s best corners at his second straight Pro Bowl. The rest of the offseason was spent learning the intricacies of his new position while competing for Antonio Cromartie’s old job against Jerraud Powers, who’s played the position for about 15 years.

Before he could be a formidable corner, Bethel said he had to learn the right technique, patience and where he was supposed to be on the field. He gave credit to former Cardinals cornerback Rod Hood, who was a training camp intern. He helped Bethel during camp, especially with his technique.

Almost four weeks into his fourth NFL season, Bethel finally believes he has the fundamentals of being a cornerback down. But one reason why it’s taken Bethel so long to develop into an NFL-caliber corner, he believes, is the direct result of a lack of reps.

“I think the biggest reason it’s taken me as long as it has — and the process is going a little longer that I would like — is it’s different in practice than when you’re going against that live game speed,” Bethel said. “I feel like you really need that to see if your technique is really what you think it is.”

Mathieu grew up playing running back and was switched to cornerback during his sophomore season of high school. But he said it wasn’t until his freshman year at LSU that he felt comfortable playing the position. That was a span of four years, right where Bethel is this season.

“I feel that this past year like he’s made great strides.”

Bethel’s role is expected to increase this season as long as the offense permits it.

If the Cardinals have time to substitute in their speed package, coach Bruce Arians wants to see Bethel play 10 to 15 plays per game, which could add up to more than twice as many snaps as Bethel got last year.

Bethel knows he needs it.

“Now it just comes down to getting some game time and, you know, working against receivers during actual game time,” he said. “I think that’s the biggest thing I need now – actual live game play.”