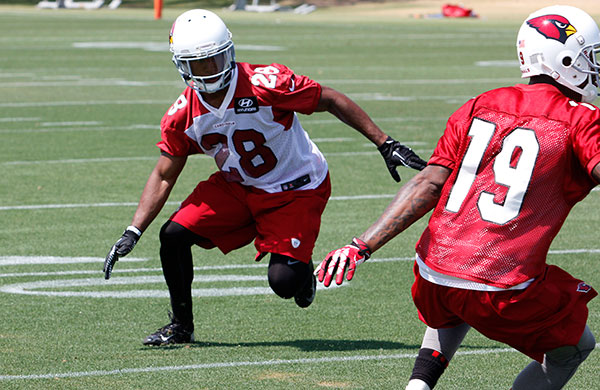 If football didn’t work out at the next level, Justin Bethel wanted to be a cake maker. Turns out, he’s doing perfectly just fine as an NFL playmaker.

“Oh, I can make some real good cheesecakes,” the Cardinals’ third-year cornerback said. “That was the plan, too. I was going to school for culinary art before all this happened. It just worked out where football put me in the position I needed to be, and I’m here now.”

Bethel was the first player drafted out of tiny Presbyterian University (Clinton, S.C.) in 43 years, but the Cardinals knew they were getting a special-teams ace by using a sixth-round pick on him in 2012.

After all, he set the Big South Conference record by blocking nine kicks for the Blue Hose and always showed a penchant for making the big play.

It didn’t take long for him to prove the Cardinals were right. In just his second preseason game as a rookie, he blocked a punt and returned it 19 yards for a touchdown against the Raiders. Later in that same game, he blocked an extra-point attempt, too.

“Yeah, I think that blocked punt was probably my favorite play,” Bethel said. “That was the kind of play that launched me forward and allowed me to make the team, first off. I think it just got me ready and let people know what I can do. It just kept going from there.”

It culminated last season when Bethel was named to his first Pro Bowl as a special-teamer. The Cardinals’ primary “gunner” on punts and kickoffs, he led the team with 21 special-teams tackles. He also blocked two field goals, downed four punts inside the opponent’s 10-yard line and recovered a muffed kickoff.

And as good as he is in those situations, Bethel is making even bigger strides in the secondary, coach Bruce Arians said, as a legitimate NFL cover corner. He’s about as versatile a playmaker as the Cardinals have on their roster.

Bethel was asked to describe what it’s like to be in the playmaker’s “zone” just before he delivers an impactful hit, tackle, interception or blocked kick.

“It’s kind of crazy how it happens,” he said. “When I’m going down the field on a punt or a kickoff, or that second right before I can see me blocking a kick, right before it happens it’s like, ‘OK, I’m about to make this play’ and everything slows down.

“But at the same time, it’s super fast, and it’s like, ‘Oh, man, it just happened’ and it just kind of catches up to you. I think it’s just that you get so used to seeing it, you go through it in your head, and when the time comes your body is prepared for it because of all the repetitions. It kind of just becomes second nature.”

For Bethel, it’s all about vision and a singular focus. He picks out a point of attack, zeros in on it, and doesn’t hesitate to finish.

“It’s crazy because a lot of things are going through your head, and at that one moment, things just kind of freeze and then it all speeds up again,” he says. “It seems like it takes longer than it does, but everything really happens in a split second.”